The story started more than a year ago, in 2018 when I started to get interested in the exploits of the D4C team and their QSOs on 2 meters with Ireland. I clearly realized at that time that it was possible to make QSOs in 2m beyond the Lesser Antilles from Guadeloupe and I started to learn about the method because for me, stuck on a pebble in the middle from the Atlantic it was obvious that the 2m was made for local traffic, satellite that I practice for quite some time, the EME, but nothing else, for lack of fighter. At that moment, I never imagined being able to do this QSO with Cape Verde, the hope was to reach the main West Indies or the South American continent.

D4C team uses an AIS receiver to detect unusual VHF activity. They broadcast the information on DXmaps.com. When asked, the D4C team recommends that I ask for equipment at Vesseltracker.com, which I do. A few weeks later, I installed their antenna and their raspberry pi on the Radio Club of Guadeloupe UHF repeater FG5ZBX. The aggregator for DXMaps runs on Windows, Linux user that I am, I seek another solution and I abandon the idea of ​​DXMaps and just write a script in Python that analyzes the distances of AIS beacons received. The script should ultimately be able to generate voice alerts on our locals repeaters network but for now, only an email is generated every hour when a significant number of AIS beacons have been detected more than 150 km from Saint-François. For the record, with the next tropospheric event, I was forced to stop the script because I received an email 22 times a day. It was crazy! 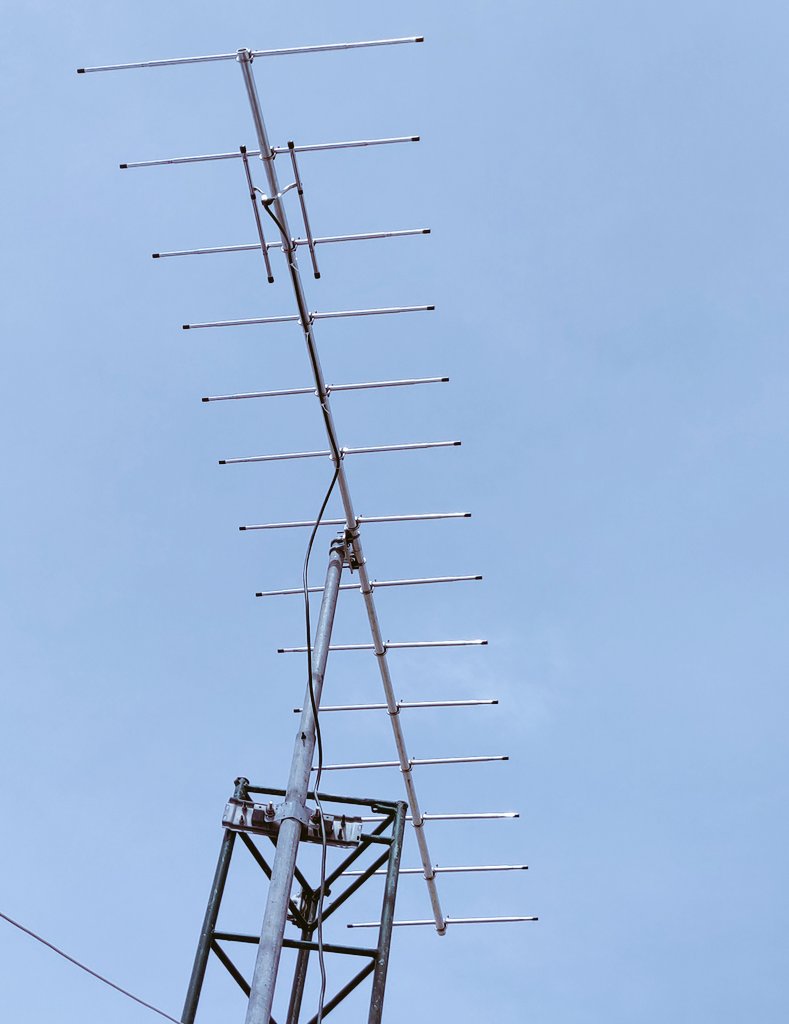 Equipped with cross-polarized antennas, I have the opportunity at the end of May to buy an old Mosley AM-14-2 from the family of Frantz FG5FR, a great DXer from Guadeloupe, who died in 2018. He never had the time to install this antenna which is in this its cardboard packaging which took the water and without documentation. Mosley kindly send me the doc because the feeding system is more than exotic and honestly, I do not have much hope with this antenna atypical.

Tropo forecasts are excellent from June 7th. I can not thank enough F5LEN work on the subject, its forecasts are very accurate to a few km. I decided to mount the antenna on a mast without rotor, in the direction of D4C with a preamplifier history to maximize my chances of receiving their beacon in FT8. I do not believe in a single moment to establish a QSO, really. My exploit would be right to decode the beacon. 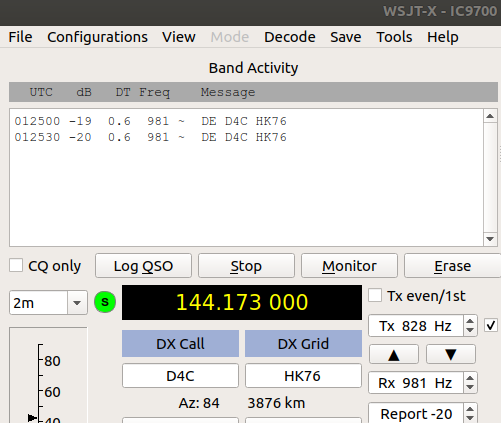 I keep my IC9700 running on 144.174 with WSJTX, D4C uses an FT8 beacon with 500W on an omnidirectional dipole array. Just that. Of course it helps and clearly the success of this link is fully theirs. Running a beacon with such power and in this mode is the solution for the success of this project! I could not spend my days and nights listening to a hypothetical CW beacon and I will have given up. From the evening, reception by 2 times of the beacon, the small message FT8: DE D4C HK76 is crazy. Clearly I do not even believe it and I’m stupid in front of my screen. WSJTX announces me 3876 km!

All night, WSJTX runs and in the morning, I have a consistent list of receptions, the signals rise to -16 dB above the noise, with my 100W, it is theoretically possible to make a QSO. The following days, the tropo tunnel breaks up as expected, the beacon disappears.

On June 15, the forecasts are excellent, better than a week ago. Of course, the equipment is in service all weekend H24 and the reception of the D4C beacon is back. The signals are better and when I see that the beacon is received above -15 dB, I allow myself to make transmissions in a few minutes by launching call. Bingo, 16, I see that my signal is received at D4C via www.pskreporter.info. Mark EA8FF discovers the same thing as me and goes into remote connection on the beacon computer. Now I see CQ D41CV HK76 on my screen, I know there is someone behind this computer, new attempts, unsuccessful. The D4C team is on the war foot, June 16, they mount a VHF antenna they point to the Caribbean but the antenna has suffered and needs to be repaired, back on the omnidirectional antenna array. The signal has progressed further, I think while the signal is at its peak (error!) And new attempt Sunday, June 16 at 16h54 local time of Guadeloupe. It’s done, the QSO in FT8 is validated!

To the following ones!

I warn friends in Guadeloupe, Franck FG4ST equipped only with a vertical antenna and can even decode them, the signals continue to increase in the evening. -4 dB below the noise at home, the idea crosses my mind that one could perhaps make a qso in CW.
Franck perseveres all evening with his small vertical to try to answer. For hours. The patience of Mark and Franck is without limit, it hangs the contact, incredible!
The next day, it is Guy FM5AN who sticks to it, then comes the turn of Franz J69DS, Eddy FG5GH, Angel WP4G, Jose KP4EIT, it’s just magic!
On June 19, the signals became totally crazy, I get on my roof with a Yagi 3 elements and my FT817, D4C signals are 55! I make a video, Alain FG5GP does the QSO with a vertical.

I harass the friends of the D4C team for 2 days to make the qso in CW.
Not easy for them because they are in remote control of the PC, the risk of planting the installation and doing nothing is important. Finally they accept and on the 19th we establish the QSO very easily in CW. Eddy FG5GH also does the QSO a few minutes later. 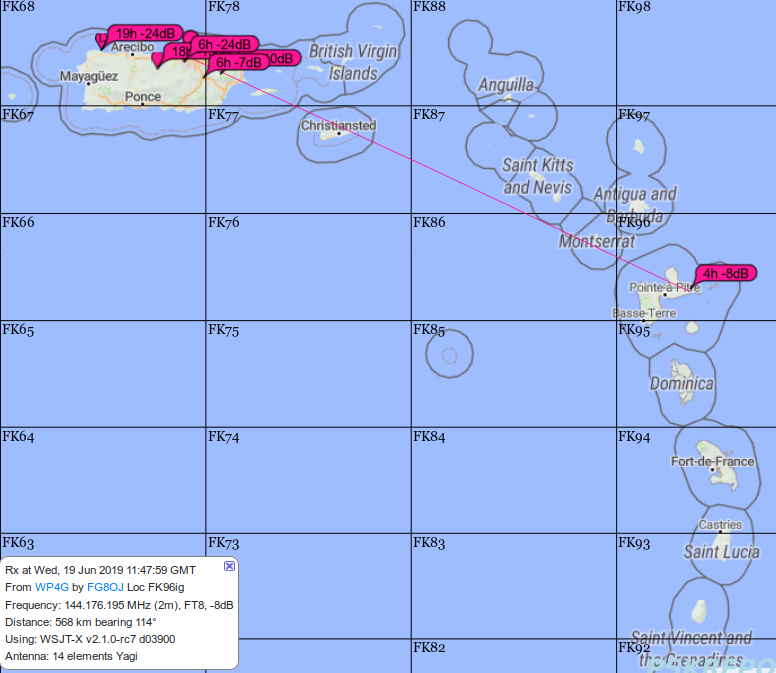 I was of course contacted by OMs Azores, Brazil, to attempt some new distance QSOs. I even received on June 11 a Brazilian station PV8DX 1500 km. I wasn’t at my shack at this time but my antenna was in the direction of Cape Verde, it’s crazy!
I ride a Whatsapp group with friends from the Caribbean and several stations have reassembled their antennas Yagi, it’s just great! Since, everyone is trying to contact each other in the Lesser Antilles!
The idea of mounting a beacon in Guadeloupe is of course very present, we have an exceptional site for this but the Radio Club Guadeloupe lack of finances to equip. If you ever have an amplifier or a VHF SSB transmitter (to transmit in FT8) to offer us, do not hesitate 🙂

D4C Team is an incredible team and does a huge job. I would never have been able to make this contact without the 99% of effort on their side but for me, the remaining 1% remains a good entertainment!